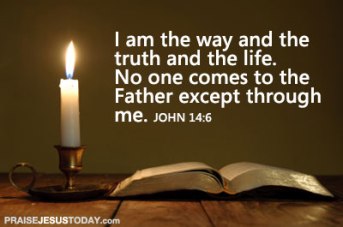 A comment we all frequently hear from people is that lots of people don’t accept the Church’s teaching on certain issues, therefore the Church should change them so that people will come to church again. They will claim, “This is 2014! The Church has to get with the times and change its teachings or more people will continue to leave!” We don’t at all like the idea that people are leaving, but what would it profit us to change the teachings just to keep people in church on Sunday? Recall what happened when Jesus revealed his teaching on the Eucharist and many people found it too hard to accept and no longer followed him (cf John 6). What didJesus do? Did he call out after them and say, “Wait a minute! Come back! You don’t like that teaching? Okay, I’ll change it. What do you want me to teach? Just tell me and I’ll teach that, as long as you stay with me!” No. Instead, with a heavy heart, he let them go. He was not happy that they would no longer follow him, but he could not change his message and the call to unity with himself and the truth he had come to reveal simply because people didn’t like it. Neither can the Church change a teaching just because it is not popular.

“But,” they may object, “if the message were more appealing, more people would come, and you’re never going to get certain people to come back as long as the Church holds that teaching!”  In other words, “give the people what they want and they will come!” I like to use this analogy:

I could fill our church every Sunday night with teenagers, young adults, and others who would never otherwise come to Mass. It’s very simple: give away free beer and show porn. First of all, I’d be arrested. But even if I weren’t, would that be doing anyone any good? Are we merely trying to count how many people are sitting in church on Sunday, or are we trying to bring them the call of salvation by fidelity to the teachings of Christ? I realize this is a drastic example, but it makes the point: anyone who would have us change the teachings just to get more bodies in the pews does not understand the call to salvation by avoiding sin and being formed in the image and likeness of Christ.

Yes, we should do everything in ourpower to be welcoming and acknowledge that even people who are sinners – as we all are – are welcome in church on Sunday and can have positive gifts to offer, which is what Pope Francis has been saying. But under no circumstances can we pretend that sin is not a sin just to make them happy. Our job is not to craft a popular message but to be consistent to the message of salvation by fidelity to the call of Christ. Only that can save people.

Suppose someone, tired of paying over $4 per gallon for gasoline, observing that water from the garden hose is far cheaper, decides he wants his car to run on water. He even gets 96% of car owners to agree with him, and petitions the car manufacturer to allow them to put water and not gas in the gas tank. All the opinion of those people doesn’t change the fact that the car doesn’t run on water. If the people complain that the car manufacturer lacks compassion and understanding of the people’s difficulties and keeps petitioning every new CEO who comes along to change the “law” and allow the car to run on water, does the manufacturer give in and allow it because the people want it? Of course not! Put water in your gas tank and your car will be destroyed! Similarly, when the Church clearly teaches that any given action (such as any sexual act outside of the covenant of marriage, abortion, etc.) does not lead to union with Christ but instead damages that union, no one’s personal opinion changes that. So anyone who advises us to ignore what the Church teaches and “follow their own hearts” is like telling people it’s okay to put water in the gas tank.

“Okay, but how about issues that do notseem to have moral relevance, such as women priests?” Some people are clamoring for the Church to readdress this issue. Well, Pope Paul VI did precisely that. He looked carefully at Tradition, at Scripture, and at previous magisterial teachings, and after extensive prayerful study, he defined in the encyclical Inter Insigniores that the Church does not possess the authority to admit women to the priesthood, and that this is a teaching that is part of the Deposit of Faith which must be adhered to by all. Pope John Paul II further defended and upheld this position in his encyclical Dignitatis Mulieris. Both Pope Benedict XVI and Pope Francis have upheld this, Pope Francis most emphatically so when in one interview he would not even address the question. He simply said, “No. That has been settled definitively.” The question is therefore settled; end of discussion. So those who are still clamoring for women priests are, quite frankly, throwing an ecclesiastical temper tantrum. Like a child who continues to cry and nag when a parent says no, trying to wear them down until they give in and give the child what he wants, so these people continue to cry and carry on, kicking and screaming in their tantrum. This is hardly mature behavior, and hardly what a disciple of Jesus is expected to do. While some issues are within the Church’s power to change (such as married clergy), others are not, such as women priests, gay “marriage”, abortion, contraception, etc. These have been definitively settled by the Church. So let’s end the temper tantrums, but in a spirit of love for the Lord and maturity of action, accept it and move on.

Remember that the Church’s purpose is not to be popular. We’re not battling other religions to see who has the most people in our pews on Sunday. Our commission by Jesus is to preserve what he has revealed to us and to faithfully teach everything he has commanded us and call people to salvation. Our job is to teach the truth whether people accept it or not. Yes, we will do everything we can to help people understandand accept Christ’s call to holiness, but we cannot change Christ’s teaching. That would betray our very reason for existence.