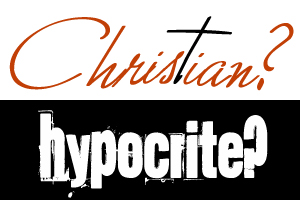 Someone recently told me that he was having a discussion with a few people who were very much trying to follow the Lord, but they felt like fake Catholics because they don’t agree with the Church on some of the “hot button” topics today, and they wanted to know if that means they’re not good Catholics and are instead hypocrites. It’s an excellent question and I was very glad that these young people were considering it. There may be many others reading this who have the same feeling. Should you be considered a fake Catholic or a hypocrite if you don’t follow everything the Church teaches? My answer is, “not necessarily.” There is more information that needs to be looked at before anyone could judge himself and accuse himself of being fake or a hypocrite.

First of all, what does it mean to be a hypocrite? Hypocrites are not people who don’t understand or who don’t agree: hypocrites are people who claim they are doing God’s will and yet turn around and end up doing precisely the opposite of what God wants. I will give you an example of where I have found hypocrisy recently in some people in the church: Usually on my blog and in other places I find myself battling the liberal people who want the Church to change her teachings, but recently I have found myself in a strong battle against people on the extreme right who are condemning Pope Francis. I found myself in a conversation on a rather reactionary conservative site that is accusing Pope Francis of abandoning the faith in his new apostolic exhortation Amoris Laetitia. They seem to have ignored all of the strong things the Pope said about the value of a traditional marriage and the things for families to do in order to keep their marriage strong and have focused their attention on a footnote in one comment about Communion for divorced and remarried Catholics. In the exhortation the Pope clearly reiterated the Church’s teaching that divorced and remarried Catholics who have done so without an annulment are in an irregular situation and cannot licitly present themselves to receive Holy Communion. In a footnote to that the Pope mentions that under certain circumstances some people may be able to be admitted to Communion. That has always been the teaching of the Church. For example, couples who are invalidly married but willing to live as brother and sister-meaning they refrain from any sexual activity-may present themselves for Holy Communion after confession provided no scandal to the faithful exists. Unfortunately, these reactionary people read only the footnote and seemed to be convinced beforehand that Pope Francis, by not just bashing people over the head as sinners, is somehow altering the Faith and has changed the Church’s teaching on the matter. I put a comment on a question board on this site asking people, “please someone showed me the quote where Pope Francis changed the Church’s teaching on Communion for divorced and remarried Catholics?” The reactions I got back from that were vile and obscene! While some very politely accused me of living in a naïvely Pollyanna world where I did not want to see the “serious danger of the Pope’s new teaching,” others told me I was doing the devil’s work and they were praying for my soul because I was in danger of being condemned for all eternity simply because I did not condemn Pope Francis! Another one said he would listen to tradition and not “the evil teachings of this evil Pope”. When I asked him where he found the justification to judge the Pope, he said to me “God has given me the right to judge the Pope!” Mamma Mia! That sounds like Martin Luther all over to me! That’s precisely what the Protestant reformers had said: they felt that the Pope had broken from Tradition and they had a God-given duty to correct the Pope and even broke away to “reform” the Church into what they thought it was supposed to be! I wrote a note to the editor of that website saying that I would no longer participate on the site because of the self-righteous and sanctimonious statements of some of the readers that they are attracting. I told him they are attracting people who believe they speak for God and when even the Pope says something they don’t like they believe the Pope is wrong and they are right; in other words, their minds and their thoughts are the ultimate judge of truth, and in their self-righteousness they have repeated exactly what the Pharisees did in condemning Jesus. The Pharisees were convinced they were defending God and attacking an evil person when they sent Jesus to his death, and I told the editor I would have no part of such an attitude! That to me is hypocrisy; the “I-am-right-and-anyone-who-disagrees-with-me-is-a-condemned-sinner” attitude.

As for others who don’t believe they agree with the Church, we must remember that Jesus during his lifetime made some very provocative statements and he challenged people. Lots of things that he said went against the grain. Sometimes people rejected him without hearing him through and understanding why he taught what he did, and so they ended up not following Jesus and not experiencing the salvation he could offer them. That is a mistake. Take for example the situation when Jesus gave the Great Discourse on the Bread of Life, telling everyone they had to eat his flesh and drink his blood in order to have eternal life (cf John 6). For Jews that was a horror! Contact with human blood made you unclean, and so it violated everything they believed in. In addition, Jesus did not tell them he was going to turn bread and wine into his body and blood, and so they must have thought he was talking about cannibalism. St. John tells us that after this many of Jesus’ followers abandoned him and would no longer be his disciples. He turned to the apostles and asked them if they too wanted to leave him, and Peter replies, “Lord, to whom shall we go? You have the words of eternal life.” Peter didn’t understand any more than the others did, but he was so convinced in whom Jesus was that he accepted something that made no sense to him simply because Jesus said it and he knew Jesus could not be wrong. What Peter said is what Jesus was looking for: trust in him completely, so that even things that did not make sense to us we would accept because Jesus said it and then look for the answer and the explanation as to why Jesus said what he did. The apostles found that; those who left him did not.

So to people who accuse themselves of being fake Catholics because they reject the Church’s teaching on any number of issues, I ask them to ask themselves this: have you carefully looked at why the Church teaches what she does on this particular issue? Many times we reject something without understanding why it’s taught in the first place. Remember that we, thanks to Original Sin, are rewired in a faulty way whereby what is God’s will and what advances us on the spiritual journey to salvation is not natural to us. Because of that, our natural inclination is not to embrace the things that lead us to heaven but what makes us happy here on earth. Sometimes meeting a need here on earth would compromise our call to salvation. But we don’t see that, especially when to follow the Lord’s teaching would be to cause us inconvenience or even suffering here and now, and we end up rejecting the teaching because we only want convenience now and don’t see the high price we have to pay for that convenience.

So have we thought everything through and gotten complete and sufficient information to know that something that would satisfy our desire now will compromise our call to salvation, and then chosen to reject the teaching? If so, then I would say we are not authentic Catholics. But for most people we simply have our own opinions that have come from the world around us which we have openly accepted without even thinking through, and ended up rejecting the Church’s teaching without really thinking it through. So I’m not saying for a moment that it’s okay for someone to reject the Church’s teaching! At the same time, however, I don’t think it’s fair for anyone to accuse either himself or another of being a hypocrite or a fake Catholic simply because he has not completely come to understand why the Church teaches something it does. So before you condemn yourself, do research and find out why the Church teaches what she does on certain issues. If you are of honest faith and a desire to follow Jesus, chances are when you do, you will find yourself understanding the teaching better and perhaps even accepting it. Only if someone has completely understood the teaching and chosen to reject it should he say that he is not a faithful Catholic.