Have you ever felt that you don’t know what God is supposed to do for you? When you go to church, when you pray, what are you looking for? It seems to me that many people come before the Lord but really don’t know what they’re expecting from Go. Or they have a completely different plan for God than what he wants. So the question we all need to ask is, “What are you looking for?” What do you expect God to do for you? And then we must ask, “Is that what God wants to do for us?” If we are not on the same page as God, he will forever be a frustration to us, or as Jesus says, a stumbling block. Do we want the same thing for ourselves that God does?

Let’s start by talking about what God isn’t and what he does not want to do for us: He’s not Santa Claus; he doesn’t promise to bring you good things or do good things for you if you’re good but if you’re bad he’ll punish you. He’s also not the genie in the lamp, that if you just rub the lamp properly the genie will come out and grant all your wishes. He’s not the police officer who’s going to make someone stop hurting you, nor is he the judge that is going to punish somebody who has harmed you when you bring it to him. So what does God want to do for us?

Somehow we have this idea in our heads that God has said “Come follow me and I’ll make sure nothing bad ever happens to you. I’ll give you the life of Riley!” So we go to church faithfully and we pray every day, thinking that nothing bad will happen to us, and then when something bad does happen we get very angry at God and we say, “You didn’t hold up your end of the bargain! I followed you and you still let bad things happen to me!” But God never said he would make sure nothing bad ever happens to us! He never promised that! We think he should do that, and when God does not work the way we think he should we get angry at him. No, God has come to help us turn away from sin and to help us deal with the difficulties and tragedies of life by finding him in the midst of our life and turning to him for strength to carry the crosses we must bear. By doing that, we turn the evils that befall us into means to bring us closer to God.

Let me give you a perfect example: this past September I had to go to Louisiana to participate in the funeral of a young girl only 21 years old whom I had baptized. She died after a long battle with brain cancer. I sat with her father at the very same kitchen table where I had played cards with her as a child years before. Her parents are faithful Catholics who have followed the Lord regularly their whole lives. Her father told me over lunch that so many people have remarked to him that they don’t know how he dealt with losing a daughter. They say they would have fallen apart if that it happened to them. They realize that it was his and his wife’s strong faith that is helping them through it. And he told me that several people have written to him emails or spoken to him and told him that watching him face the most difficult thing anyone could ever imagine has reinforced their faith. They’ve come to see the reason why we worship God and the importance of it and it has inspired them to return to church. The father said to me, “We were praying for a miracle for Kelly, but maybe the miracle we got was different from what we wanted. Instead of Kelly being healed, by her death she brought many people back to God.” Amen! That is indeed the power of faith. Only God could get them through that. There is nothing in the world that would have helped them through that very difficult time. And by their faith they turned that evil into an opportunity to bring other people home to God.

Now, faith is not something you can store in a box in the closet for years and never use until you need it. The faith to do what this family did is the result of following God each and every day, knowing him, loving him, and finding his presence in your life. After that, worrying about praying for God to help us win the lottery or to lose 10 pounds seems almost silly! What does God want to do for you? Very simple: he wants to be there to help you every step of the way to make sense of and deal with the tragedies in life. Bad things happen in the world, and it is not God’s fault that bad things happen. He has come to help us carry the cross and turn it around so that we can deal with the difficulties, take the bull by the horns, and know that nothing can destroy us as long as God is there with us. When we realize that every bad moment has the power to bring us closer into God’s embrace, what have we to fear? Evil has no power over us!

And of course, most importantly, he comes to save us from our sins. And when we really think about it, the only thing worth fearing is being in sin. Sin is the only thing that can destroy the promise of eternal life that God has given us. Ultimately we’re on a journey to heaven, and Jesus is showing us the path to get there. We are set on that journey at our baptism, and by faithfully worshipping him, by following everything he tells us, by knowing and loving him, he helps us stay on that path and not be distracted by all the things around us that would make us want to leave that call to heaven behind to make ourselves happy and comfortable here on earth. There is no tragedy that can take us away from God or can destroy our promise of salvation in and of itself. Only if we allow it to turn us away from God does it have its real evil. And that is exactly what Satan is trying to do; he brings evil into the world hoping we will get angry at God for the evil that happened and turn against him so that Satan can just reel us in. Some people need only stub their toe to get angry at God, and when that happens they are Satan’s easy prey. When people get angry at God for the bad things that happen, does that give them any peace? Does it help them deal with the problems? Does it help them to heal and move on? No. It gives them a target for their anger, but nothing more. In fact, it turns them away from the only one who can give them peace. Only by turning to God, by doing what he wills for us to do and by inviting him into every moment to help us deal with our struggles, our weaknesses, the bad things that happen to us, our confusions, whatever it may be, do we find God. So do not fear bad times. Do not fear ill health. Do not even fear death. Fear only dying in sin. And if we follow the Lord, if we come to Mass to adore him and love him for everything he’s done and to ask for the strength to walk each and every day knowing he is holding us by the hand every step of the way, then we have found what God wants to do for us. 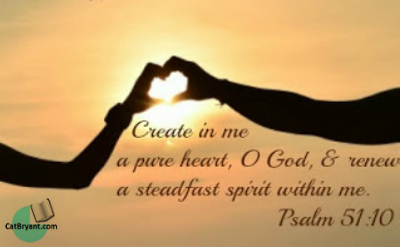